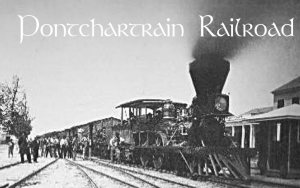 The City of New Orleans granted a charter to the Pontchartrain Railroad in 1830. It operated for over a hundred years. So, the railroad connected Faubourg Marigny to Lake Pontchartrain via what now is Elysian Fields Avenue.

Our site presents the history of the railroad. It also documents the neighborhoods the railroad serviced. Our mission is to, well, talk about Gentilly.

The site presents the history of the Pontchartrain Railroad in five sections:

We’ll cover the origins of Milneburg prior to the railroad, then how it came into being. Then, after the Southern Rebellion, the railroad transitioned to more passenger service. Milneburg became a recreation destination rather than a port facility. So, as Gentilly grew, the railroad became less and less necessary. We document that decline. Gentilly continues on as an important part of New Orleans, and we present that history as well.

I named my N-scale layout after the real Pontchartrain Railroad. I created a website to document the layout’s growth and changes. The fictional railroad (PON) has two “districts”. They are Milneburg and Mid-City. I take some liberties with both neighborhoods. That’s part of the fun! So, the logo above is for my “Pontchartrain Railcar Company (PONX).” The railcar company specializes in the restoration and customization of classic passenger railcars. While some of the cars “restored” at the PONX facility never ran in New Orleans, restoration is a great excuse to include them. Therefore, I get to write neat stories!

Since I’m a writer, I’ve got ideas about the fictional history of Milneburg and Mid-City. I worried that the fiction would conflict with the real story. So, I created this site. It’s the first of the New Orleans Railroads network, and hopefully one of many more to come.

The network is open to anyone who wants to develop a website covering local railroad topics. If you’re interested in starting a site under this umbrella, contact Edward.