Milneburg 1927, and the Orleans Levee Board

Photo of what is now the intersection of Elysian Fields Avenue and Robert E. Boulevard, 4-March-1927. Photo shot by an unidentified photographer for the Orleans Levee Board.

The Orleans Levee Board shot a lot of film in the late 1920s in Milneburg. They prepared for land reclamation projects in the area. This shot, shows how far the lake shoreline extended south. The levee at the time blocked the lake at what is now Robert E. Lee Boulevard. So, with the tracks running the length of what is now Elysian Fields Avenue, pinpointing this photo is not difficult.

Land reclamation in Milneburg began in the Fall of 1927. The process involved building barriers in the water, then pumping out the water behind the barrier. When the water was gone, move the barrier out further, drain that. Keep going until pumping the water wasn’t practical. By mid-1928, reclamation advanced to the lighthouse. So, in modern terms, reclamation started at Robert E. Lee, advanced to Leon C. Simon, and terminated at what is now Lakeshore Drive. So, the lighthouse ends up in the middle of the Pontchartrain Beach Amusement park. Now, it’s right next to the UNO Hotel, Restaurant and Tourism school.

The Pontchartrain Railroad diminished dramatically in the mid-1920s. Milneburg’s usefulness as a commercial port facility declined after the Southern Rebeilion. By the 1880s, the railroad, along with restaurants and hotels in the area, re-branded. They sold the ride out to the lake as a day trip or overnight entertainment excursion. While the re-branding was successful for about twenty years, the area lost its attractiveness. Fishing camps dominated the Milneburg landscape in the 1920s. The railroad connected those camps with the city. The railroad’s profitability dropped.

The reference to “L&N tracks” on the photo goes to ownership. The Louisville & Nashville Railroad acquired the Pontchartrain Railroad in the mid-1880s. 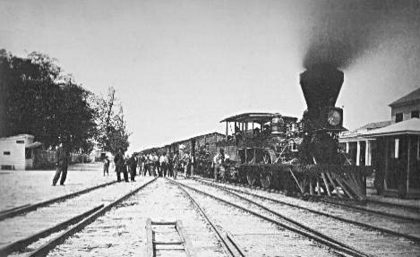 The Pontchartrain Railroad operated from 1831 to 1930. The trains ran out to the fishing village of Milneburg. A port facility developed along the lakefront at Milneburg. The railroad connected that port to the city. The Pontchartrain Railroad carried freight and passengers. After the Civil War, it ran mostly as a day-trip line. By the end of the 19th Century, it carried almost exclusively passengers.

The railroad purchased two steam engines in 1832. Those engines lasted for about twenty years. The railroad cannibalized one for parts to keep the other going. By the late 1850s, the railroad purchased the larger engine shown in the photo above. This engine operated to the end of the 1800s. The big smokestack inspired most of the stories and memories of the train.

The Smokey Mary ran simply from the Milneburg Pier to a station at Elysian Fields and the river. Eventually, the railroad added a stop at Gentilly Road, but it was only by request. The railroad terminated operations in 1930. The WPA paved Elysian Fields from river to lake in the late 1930s. Pontchartrain Beach opened in Milneburg in 1939.

The village of Milneburg was located at the end of what is now Elysian Fields Avenue. Shipping traffic came in from the Gulf of Mexico, through Lake Borgne, into Lake Pontchartrain. Ships docked at the Milneburg pier. Merchants offloaded their goods and put them on the Pontchartrain Railroad, to bring them down to the city.

Jazz on the Lakefront

By the 1910s, Milneburg’s residents lived mostly in fishing camps. Musicians rode the Smokey Mary out to Milneburg to play some of the small restaurants. They also walked the piers, playing for locals. They busked for tips. This kept them busy during the day. The musicians rode the train back to the city in the late afternoon. They then played gigs at dance halls and saloons in town.

NOTE: This post is originally from NOLAHistoryGuy.com. I’ll be migrating the railroad-related posts from there to the blog here and the main NewOrleansRailroads.com blog.

Marigny to Milneburg – Origins of the Pontchartrain

Marigny to Milneburg – How the Pontchartrain Railroad began.

Sully illustration from 1836 of Faubourg Marigny

From 1836, an illustration by G. W. Sully of the riverfront in Faubourg Marigny. You can see the station for the Pontchartrain Railroad on the left side of the illustration. The railroad was chartered in 1830, and began operations in 1831, so this was just five years into its existence. The purpose of the Pontchartrain Railroad was to connect the city, specifically, Faubourg Marigny, Faubourg Treme, and the French Quarter. Alexander Milne developed the area at what is now Elysian Fields Avenue and the lake into a port district, which became known as Milneburg. In addition to coming up the Mississippi River, much of the city’s ocean-going ship traffic came to New Orleans from the Gulf of Mexico, through the Chef Menteur Pass or the Rigolets Pass, into Lake Pontchartrain. Once in the lake, the larger ships were unable to go down Bayou St. John and the Carondelet Canal. Milneburg made it easier for the ships, since all they had to do was dock on the lakefront.

The only catch was that the city was five miles away! The solution was simple, though, build a railroad. The planning/discussions for the railroad began in 1828. The first train, pulled by horses, left the station on April 14, 1831. Steam locomotives took over for animal power in June of 1832. This connection was a major path for commerce and goods up to the Civil War. After the war, as rail service to New Orleans began to expand, the Pontchartrain Railroad was acquired by larger rail concerns.

Notice that, in this illustration, the vessels are all powered by sail. That would change dramatically, as larger ships were constructed with steam engines and side paddlewheels, to speed up the journey from New Orleans to Havana, and various ports in along the American coast and Europe. These heavier ships were unable to use the passes into Lake Pontchartrain. This cut back on the shipping traffic docking at Milneburg, and the railroad no longer transported the goods it once did. Like many port areas, Milneburg became more of a recreational area than commercial, and the railroad then began to carry more passengers than goods. In the 1830s, though, it was all about commerce.

(This post was first presented on NOLA History Guy)

The City of New Orleans granted a charter to the Pontchartrain Railroad in 1830. It operated for over a hundred years. So, the railroad connected Faubourg Marigny to Lake Pontchartrain via what now is Elysian Fields Avenue.

Our site presents the history of the railroad. It also documents the neighborhoods the railroad serviced. Our mission is to, well, talk about Gentilly.

The site presents the history of the Pontchartrain Railroad in five sections:

We’ll cover the origins of Milneburg prior to the railroad, then how it came into being. Then, after the Southern Rebellion, the railroad transitioned to more passenger service. Milneburg became a recreation destination rather than a port facility. So, as Gentilly grew, the railroad became less and less necessary. We document that decline. Gentilly continues on as an important part of New Orleans, and we present that history as well.

I named my N-scale layout after the real Pontchartrain Railroad. I created a website to document the layout’s growth and changes. The fictional railroad (PON) has two “districts”. They are Milneburg and Mid-City. I take some liberties with both neighborhoods. That’s part of the fun! So, the logo above is for my “Pontchartrain Railcar Company (PONX).” The railcar company specializes in the restoration and customization of classic passenger railcars. While some of the cars “restored” at the PONX facility never ran in New Orleans, restoration is a great excuse to include them. Therefore, I get to write neat stories!

Since I’m a writer, I’ve got ideas about the fictional history of Milneburg and Mid-City. I worried that the fiction would conflict with the real story. So, I created this site. It’s the first of the New Orleans Railroads network, and hopefully one of many more to come.

The network is open to anyone who wants to develop a website covering local railroad topics. If you’re interested in starting a site under this umbrella, contact Edward.